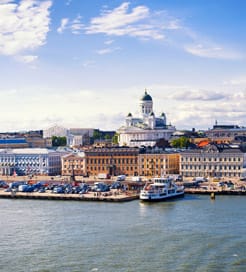 How to book ferries from Latvia to Finland

There is currently just the 1 ferry route running between Latvia and Finland operated by 1 ferry company – Tallink Silja. The Riga to Helsinki ferry crossing operates weekly with a scheduled sailing duration from about 18 hours 45 minutes.

Whilst we’ve taken great care to ensure the information on this page is correct, as the frequency and duration of crossings on all routes can vary from time to time we’d advise that you get a live quote for current availability on this Latvia Finland crossing between Riga and Helsinki.

Ferries from Latvia to Finland

The Republic of Latvia lies in the Baltic region of northern Europe, bordered by Estonia, Lithuania, Russia and Belarus, with a western shoreline on the Baltic Sea.

Latvia’s diverse and beautiful landscape attracts a wide variety of visitors ranging from chilled out sun-seekers to avid explorers. It boasts 500 kilometres of stunning coastline and white sand beaches, as well as vast forested areas covering roughly half of the country’s landmass.

It’s capital and most popular tourist spot, Riga is a UNESCO World Heritage Site defined by cobbled streets and magnificent Gothic spires. It also offers a vibrant art-nouveau scene, so be sure to visit some of the excellent galleries. Keep an eye out for the trendy bars and cafes, too.

With a number of ports dotted along its coastline, there’s plenty of choice when it comes to travelling by ferry from Latvia. Numerous routes are available to international destinations across the Baltic Sea, which are all operated by leading ferry companies.