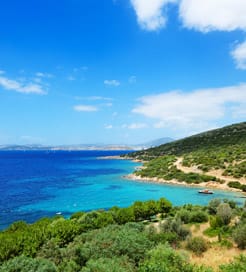 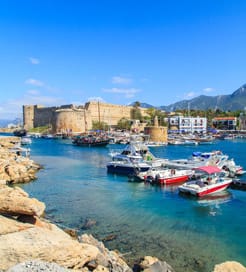 How to book ferries from Turkey to Cyprus

There is currently just the 1 ferry route running between Turkey and Cyprus operated by 1 ferry company – Akgunler Denizcilik. The Tasucu to Kyrenia ferry crossing operates weekly with a scheduled sailing duration from about 6 hours.

Whilst we’ve taken great care to ensure the information on this page is correct, as the frequency and duration of crossings on all routes can vary from time to time we’d advise that you get a live quote for current availability on this Turkey Cyprus crossing between Tasucu and Kyrenia.

Ferries from Turkey to Cyprus

Turkey is a country bordering both Southeast Europe and Western Asia, with coastlines facing the Black Sea to the north, Mediterranean to the south and the Aegean to the west.

Given its location between the two continents, Turkey has long been admired for its diverse cultural heritage, helping it become one of the most visited countries in the world. Examples of the country’s exciting history are commonplace, most notably in the majestic mosques of Istanbul and the captivating ruins of Ephesus.

Its natural scenery varies enormously, too, from sandy beaches on the west coast to massive mountains in the east, offering a wide range of outdoor activities if you want to escape the bustling bazaars in the cities.

Turkey has a number of ports along its coast and, due to the amount of islands in the Aegean and Mediterranean Seas, it offers numerous ferry crossings to a wide range of international destinations, as well as domestic routes from Istanbul across the Sea of Marmara.