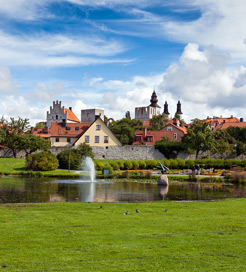 How to book ferries from Sweden to Gotland

As the frequency and duration of crossings on some routes varies we would advise that you do a live search for crossings from Sweden to Gotland to get the most up to date information.

Ferries from Sweden to Gotland

Gotland is Sweden’s largest island, found in the middle of the Baltic Sea, between Latvia and the mainland’s east coast.

The island has much to flaunt: over a hundred middle-ages churches, photogenic towns and villages, top-of-the-range restaurants and the nation’s sunniest climate beating down on sandy beaches.

The largest and most visited settlement, Visby is one of Europe’s medieval maestros. Buildings steeped in history, fascinating ruins, idyllic cobbled streets and fairy-tale-style cottages have launched this small port town onto the UNESCO World Heritage list. And quite rightly, too.

Given the ease of ferry travel from the mainland and the huge range of attractions on offer, it’s easy to see why Gotland is consistently ranked as one of Sweden’s most popular tourist destinations. You can reach Gotland from either Nynashamn or Oskarshamn, with regular crossings every day to the port of Visby.