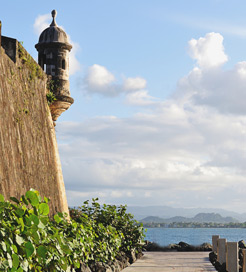 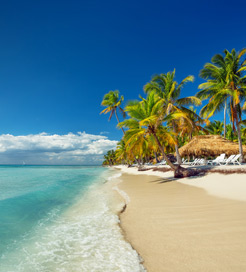 How to book ferries from Puerto Rico to Dominican Republic

There is currently just the 1 ferry route running between Puerto Rico and Dominican Republic operated by 1 ferry company – Ferries Del Caribe. The San Juan to Santo Domingo ferry crossing operates weekly with a scheduled sailing duration from about 13 hours.

Whilst we’ve taken great care to ensure the information on this page is correct, as the frequency and duration of crossings on all routes can vary from time to time we’d advise that you get a live quote for current availability on this Puerto Rico Dominican Republic crossing between San Juan and Santo Domingo.

Puerto Rico is a self-governing commonwealth of the United States in the Caribbean Sea, lying between the Dominican Republic and the US Virgin Isles.

Although currently a territory of the US, Puerto Rico was discovered by Christopher Columbus in 1493 and fell under Spanish rule for over 400 years, resulting in the culturally diverse nation we see today.

Nicknamed the ‘island of enchantment’, it has a hugely diverse landscape, with endless stretches of sandy beaches, coral reef, dense rainforest and tall mountains dominating the inland. The highest point is at Cerro de Punta, reaching 4,390 feet, which makes Puerto Rico a hiker’s paradise, too.

The Dominican Republic lies in the Greater Antilles archipelago within the Caribbean region, between Puerto Rico to the east and Cuba and Jamaica to the west.

Measuring over eighteen thousand square kilometres, it’s the second largest island in the Caribbean, after Cuba, and so it boasts a variety of beautiful, natural environments, ideal for both jungle trekkers and beach dwellers.

When the sun goes down, the Dominican Republic comes alive with carnival celebrations, spectacular feasts and fiestas. The festivities are primarily centred on the famous merengue music, with almost every town throwing regular cultural celebrations for events like Independence Day in February and the Merengue Festival in July.

Regular ferry connections are available every week from the neighbouring island country of Puerto Rico. The Dominican Republic’s main port is in the capital, Santo Domingo on the south coast, while the point of departure on Puerto Rico is San Juan.