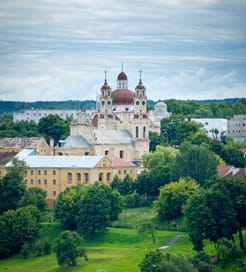 How to book ferries from Lithuania to Sweden

As the frequency and duration of crossings on some routes varies we would advise that you do a live search for crossings from Lithuania to Sweden to get the most up to date information.

Ferries from Lithuania to Sweden

The Republic of Lithuania is the largest of the three Baltic States in Northern Europe, with its short, beautiful coastline facing the south-eastern Baltic Sea.

As the southernmost of the Baltic nations, Lithuania has a relatively mild climate and so you can spend your day exploring the country’s lush forests or sunbathing on sandy beaches.

Its historic heritage sets it apart from the nearby nations, too. Its capital, Vilnius is the biggest and one of the oldest cities in the country, boasting Europe’s largest baroque old town and spectacular church steeples.

Lithuania’s main port is situated on the coast, to the west, in Klaipeda, with frequent routes available across the Baltic Sea to Scandinavia and Central Europe.